MONTREAL — It’s coming up on the 375th anniversary of when Europeans stopped calling this part of the island Hochelaga. Bridges are being decorated, cement tree stumps installed in city parks. A five-year renovation unveils a gazebo named for an author, and it quickly features carvings in its benches: Illuminati pyramids and dollar signs.

Folks cursed that the expenses should have gone to repairing crumbling infrastructure. Like Edmonton, Montréal seems to like to think that its infrastructure is the most crumbling, the most crooked and ill-conceived, the last rampart holding the city back from renewed greatness.  It seems that nowhere do the pundits base arguments on the intricacies of infrastructure funding. Or perhaps here, they do it only in French. 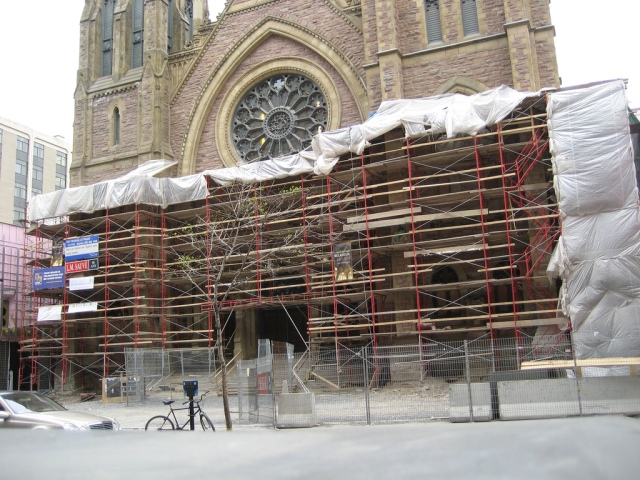 Despite being primarily in French, civic politics seem not so different in Montréal — though there are some key sustainability initiatives Edmonton ought to note:

Along Sainte-Catherine, thousands fill the Gay Village, in a vigil for LGBTQ and latinx communities in Orlando, who are mourning a fatal attack on a nightclub. The crowd is too tight to walk a bike through, and I’m shuffled aside by the camera crew of premiere Coulliard. It’s not so much a vigil as a rally.

After the 375th, the city will install inflatable tunnels along Sainte-Catherine, to allow construction crews to work 24/7, for all seasons of several years.

For the city’s 374th summer, I visit Parc de Pélican, where a community organization is housing sheep. They have a little portable fence-pen, which follows the sheep as they graze. The parc is about two long blocks of greenspace with dogs, baseball and swingsets. It has a shady little hill in the middle, across the street from a large discount grocer, a McDonald’s, and a community garden.

The parc is adjacent to an independent living complex for seniors, which lies fully built and nearly vacant. In that hardened dirt yard facing Boulevard Saint-Joseph, shipping containers prop up billboards of smiling couples. The community seems unfinished, yet no crane has been there this year.

The cranes move slowly around town. Building what? And why so slowly? Tough to say, as I don’t know ça va dire “crane” en français.

Art Hudson is the Weststar’s chief eastern columnist, and acting director of western outreach at the Weststar East.