The Government of Alberta reveals sweeping new protocols for language and measurement. 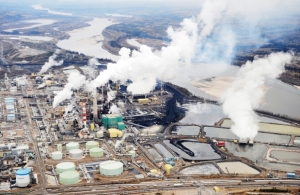 Today, the scarcely heard-of and far-reaching omnibus bill F-44 comes into full force. In everything from waste management to soil-sampling, these new wordings and formulas are working towards “re-branding the old wives’ tales that are holding us back”, the premier explained this morning.

F-44’s key provision eliminates the impending threat of ‘over-consumption’, which is no longer an acceptable judgment of economic trends, nor can it be used to describe personal lifestyle choices. Instead, citizens must worry over ‘under-wasting’, and the Tories have built a socialist system of quotas, punishing those who fail to waste.

In city’s of over 100 cars, people will face a weekly quota of eight bags of unsorted refuse per household. Most businesses must throw out a dozen perfectly good muffins each afternoon – two dozen on days when they have to sit through another conference call with the Calgary office. Even small business are forced to spill bottled water on an expensive electronic at least once per quarter, trying vainly to turn it on quickly, seeing if it’s actually broken or not, rendering it useless.

F-44 also includes significant environmental provisions – again with a socialist quota system. Provincial Parks visitors are now required to idle roadside for a minimum of one hour per axle in any instance where someone thinks they see an animal. Tourism Minister Herb Fallagan says these measure are about security – for Albertans and for Alberta’s environment. “A three-pronged approach of idling, squinting, and photographing is the best method for preventing our fast-paced modern lifestyle from polluting Alberta’s delicate ecosystem.” Further idling best practices include staring blankly into a fully-stocked refrigerator while ordering take-out as well as stopping your several-ton diesel truck outside the liquor store and leaving the engine running in the parking lot  for the entire duration of your purchase

Though previously opposed to F-44, the waffling leftists of the legislature are today praising it. Green Party leader Ken Arsenault applauds the funding boost of the revamped Ministry of Substantiable Resources. “With most of the budget diverted into enforcing intra-government red-tape, it becomes almost impossible to measure the impact of the infamous ‘cancer vat sands’,  with any standard of accuracy or timeliness. By this time next year, our emissions will look so low, Alberta will finally be able to say they took a step toward meeting Kyoto targets –  becoming the first Canadian province to do so. The Albertan government has finally learned what Albertans have known all along: simply reducing costs will result in reduced consequences at a later date.”

In response to F-44, the opposition has issued a stern warning. Speaking for what she refers to as the  “the salt of the majority,” Wildrose deputy leader Christina Halverton said, “I have a half-tractor that hasn’t run since before my grandfather was born. If this government thinks they can tell me to just throw it out like yesterday’s dog, then this government doesn’t think Albertan.”