Petroleum industry to use ‘grain elevator’ design to improve PR 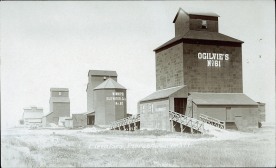 After an almost four decade long toxic public relation struggle with Canadians, top petroleum producers decide a new approach to garner support for their northern Albertan developments. The long terrifying and ‘Mordor-ish’ look of facilities will be renovated to reflect a more ‘wholesome’ and ‘salt of the earth’ point of view, choosing the historic grain elevator as it’s inspiration.

“What we are trying to do,” says a local marketing firm “is create the look that the settlers did when they pitched the initial ‘farming’ idea; wood construction, whimsical lettering and a shape that says- ‘Hey, see all these changes? Isn’t it quaint?’ We think that will do wonders for citizens who are worried that our current operations will scare their children into moving to Vancouver or Montreal as soon as they come of age.”

Will it work? Most officials seem to think so, citing the grain elevator as one of the oldest and most recognizable symbols of white colonization of our country. The average cost of one of these changes is miniscule, especially when some of the original elevators are due to be taken down, citing ‘haunting’ concerns.

“Think of it as a sleeve, like those ones you put over your beer can when you want to drink in public, slip it over, and bam! Nobody knows, nobody cares.” says key design strategists working on the focus group. This new technique will be used in tandem with the traditional ‘Leave a belt of trees so the highway can’t see it’ and ‘So far north: out of site, out of mind’ approaches that have been used extensively in the industry so far.

“Most people are well aware of our dependance on these industries, but they still take issue with the cancerous appearances of our work sites. I think they expect our energy facilities to look like the happy island from ‘Stop the Smoggies’, and not the second level from Sega Genesis’s ‘Sonic 2′. You know, the chemical one, the one that’s fun until the pink acid starts rising. You remember the game I’m talking about.” says key top politicians championing these industries.

Luckily, the prairie provinces have no shortage of hardworking, Ukrainian descents who will once again be asked to build grain elevators to keep the Americans out of here.